The fund was established through gifts made from family and friends of Mr. Francis J. D'Amanda to honor his many activities both at the University and in the Rochester community. Mr. D'Amanda received his bachelor's degree from the University in 1920 and his law degree from Harvard Law School in 1924. Upon his death in February of 1978, additional memorial contributions were received and added to the principal. In announcing the establishment of the fund, the members of the Committee wrote, "His friends wish thereby to express in some measure their appreciation of his life-long devotion to learning, his generous spirit, and his delight in life which has added much to their own happiness." The fund supports the purchase of rare and valuable books and manuscripts for the Libraries in those fields of the humanities that were of special interest to Mr. D'Amanda: art, language, music, and public affairs.

Mr. Dennis (1893-1992), who received an honorary degree in 1911 from the University of Rochester, practiced law in Buffalo, New York, for many years. In the early 1920s, Mr. Dennis began selling law and legal forms from his office, which rapidly grew into a highly successful business. In 1940, he published Law Library News, which provided information on new law titles, along with brief descriptions. He later became one of the major reprinters of out-of-print Government Printing Office documents. Other reprint titles followed, including the first 25 volumes of the Yale Law Journal and other legal periodicals and legal classics. His fund supports the acquisition of library books related to law, management, and the arts and sciences. 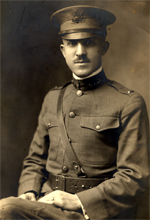 The Frederick Douglass Fund was established with an initial gift from the Friends of the University of Rochester Libraries and other regularly allocated library funds for the express purpose of purchasing and processing materials in African American history, literature, and culture. James Wyatt, then director of University libraries, stated that the fund would "benefit the University by enhancing the ability of our local resources for research and publishing purposes. In addition, the Douglass fund [provided] students with material, and bridge the gap between the school and the minority community." Frederick Douglass, for whom the fund is named, escaped slavery in 1838, and settled in Rochester in 1847, where he published an abolitionist newspaper called The North Star. Douglass died in 1895 and is buried in Mt. Hope Cemetery.

"Friends facilitate endowment funding such as this to enrich and enlarge the University Libraries in ways that reach out to the larger community, keeping the Libraries central and significant to the understanding the community has of itself."

Harold W. Stanley, President of the Friends of the University of Rochester Libraries, 2003.

View items donated and purchased by the Frederick Douglass Fund in the 2019-2020 fiscal year.