An early trustee, as well as a prominent Baptist and successful owner of a large stove works in Albany, John Finley Rathbone gave valuable timberlands worth $25,000 to the University in 1857 to help secure matching funds from the State of New York. When the match was met with Rathbone's gift, the first endowment was established to support the purchase of books and other library expenses at the University. Rathbone, who advanced to the rank of general during the course of his service in the Civil War, served as a trustee for more than 40 years and died in 1901 at the age of 82.

This fund is used to acquire books and material necessary for medieval studies in Rush Rhees Library or to be used for other purposes of the medieval studies programs as designated by the Dean of University Libraries. Mrs. Helen R. Ham (Mrs. Leeman Ham), widow of Dr. Morgan John Rhees, the son of President Rush Rhees, "indicated her desire to honor Morgan John Rhees who died in 1941." Morgan Rhees died tragically at the age 41 at his summer home in Isleford, Maine. Dr. Rhees was director of the Pratt Diagnostic Hospital in Boston at the time of his death. He was a graduate of the University of Rochester in 1921 and Harvard University in 1925. He was also assistant director of Strong Memorial Hospital and General Hospital, Boston.

This fund was created by various donors to the Campaign for the 90s and is for unrestricted support for Rush Rhees Library.

View items donated and purchased by the Rush Rhees Library Campaign for the 90s Fund in the 2019-2020 fiscal year.
James H. Rieger Friends of the University of Rochester Libraries Endowment
Date Established: 1985

View items donated and purchased by the The Joseph W. Robbins Memorial Fund in the 2019-2020 fiscal year.
Marjorie Hope Robbins Fund and The Rossell Hope and Helen Ann Robbins Endowments

During the 1980s, Rossell Hope Robbins and his wife Helen Ann donated their medieval scholar's library to the University of Rochester, and created an endowment fund to support it. Throughout their lives they supported the fund with acquisitions and gifts. The University, with the involvement of President Dennis O'Brien and Provost Brian Thompson, created the Robbins Medieval Library in Rush Rhees Library, which is governed by an Advisory Board of scholars, librarians, and friends. Alan Lupack, a leading Arthurian scholar, heads its activities. The Library has established itself as a major international medieval center. Marjorie Hope Robbins, who lived in England throughout her life, was the sister of Rossell Hope Robbins. She, too, provided funds for the ongoing purchase of books for the medieval collection. 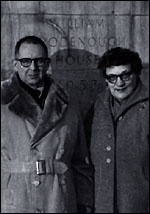 The income from this memorial fund is used for the purchase of books for the Welles-Brown Room.

John R. Russell was director of libraries at the University of Rochester from 1940-1969. During Russell's tenure, library holdings grew from 360,000 volumes to more than one million volumes. He was also librarian of the American College at Leysin, Switzerland, from 1968 to 1973. The fund is used for the acquisition of local history materials, which was one of Russell's interests.

"I think that libraries have a very important role in the history of the United States as cultural and social places for all people. This is probably true since I am a second generation librarian (my parents and me). After graduating from Bucknell University ('62), I received my MLS from University of Washington School of Library Science (Seattle) in '70. For 15 years after that I was head librarian of one of the largest circulating libraries (only 4800 sq. ft.) in Timberland Regional Library System (5-county library system with headquarters in Olympia, WA). I give my mother (deceased 1988) credit for deciding to pursue an endowment fund in my father's memory at University of Rochester library. In 1983 she and I worked with a rare book librarian there [Karl Kabelac]. We were impressed with his professionalism, interest and ability to work something out that we both wanted. I am glad that the endowment has made it possible for the library to purchase some materials in the area of my father's interests over the past 20 years."
Mary A. Russell.